Lithium is a soft, silvery-white metal. Under standard conditions, it is the lightest metal and the lightest solid element. Estimates for the Earth's crustal content range from 20 to 70 ppm by weight. At 20 mg lithium per kg of Earth's crust, lithium is the 25th most abundant element. Lithium forms a minor part of igneous rocks, with the largest concentrations in granites. Granitic pegmatites also provide the greatest abundance of lithium-containing minerals, with spodumene  and petalite being the most commercially viable sources. Another significant mineral of lithium is lepidolite.  A newer source for lithium is hectorite clay. (Hectorite (Na0.33[Mg,Li]3Si4O10[F,OH]2) which contains 0.7-1.3 % Li2O and is found near Hector, California)

Lithium is highly reactive and flammable. It never occurs freely in nature, but only in (usually ionic) compounds, such as pegmatitic minerals which were once the main source of lithium. Due to its solubility as an ion, it is present in ocean water and is commonly obtained from brines. Lithium-containing brines are volcanic in origin and found mainly in desert areas in Chile, Argentina, Bolivia, China and in the USA. In these brines, the lithium has been concentrated by solar evaporation from soluble salts. The salt lakes or deposits containing the brines, are characterized by closed basins in tectonically active areas where volcanic rocks are present.  Lithium produced from brines is of a low grade (330 to 1 800 ppm), but while the capital input for brine production is high, operating costs are low. In pegmatite lithium ores (hard-rock deposits) conventional mining techniques are used to produce lithium from pegmatites containing  spodumene and petalite in notably Australia, Canada, Zimbabwe and Portugal. While capital input is low, operating costs are high.

Lithium resources that are available for use will differ from those in deposits, because it is not possible to remove all lithium-bearing material from the ground during mining or pumping and because processing of the lithium-bearing material does not always remove all of the lithium. Recoveries are most dependent on the type of deposit, which depends on the type of mine. Evans estimates recoveries of 70% of the lithium present for pegmatites and 50% for brine operations. Evans, and others, also noted that recoveries will be higher for open pit mines (75%) than for underground mines (50%) 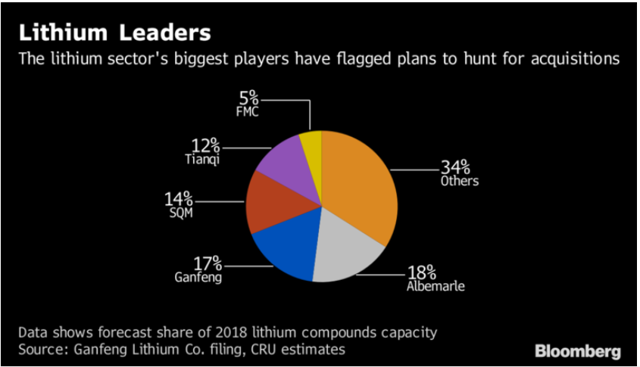 Tahil, W. “The Trouble with Lithium 2. Under the Microscope.” Meridian International Research, May 29, 2008.

Yaksic, A. and Tilton, J. E. "Using the cumulative availability curve to assess the threat of mineral depletion: the case of lithium." Resources Policy, 2009.

Fear and Lithium in Las Vegas

Jon Hykawy: What’s Next for Battery Technology and Metals Demand?

Will The Lithium Boom Upend The Potash Market?